When we talk about cooling a hot rod’s engine, we tend to disregard the effect of the oil.

We worry over fans, shrouds, radiators, etc., all of which are important and should be properly chosen and installed.  Those are subjects that have been covered in magazine articles as well as this column.  However, your engine oil coolers are a piece of the cooling puzzle that seems too often forgotten. In addition to its jobs of lubrication and cleaning the engine, the film of oil on engine parts also serves to carry away heat. Many heavy duty towing packages on our trucks include an engine cooler. Race cars and airplanes nearly always take advantage of this effect, so maybe we need to look closer as well for our hot rods. 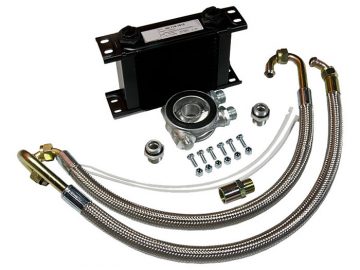 We’ve discussed the difficulties of cooling the 500c.i. Cadillac engine in a ’49 Chevy before. When preparing for another cruise across America, louvers were added to the hood to let trapped air escape, along with a metal shroud to replace the plastic one that actually sagged out of shape due to the heat. The heat soak after engine shutdown was so bad that we ruined two of them. We tried trick water pumps, a clutch fan, trick coolant and additives, even added small electric fans to the inner fender panels. All of which helped but never really solved the problem.  The car would run at 230 degrees at highway speed and bury the gauge whenever we stopped for fuel. We went to a 25 psi racing radiator cap which didn’t help the temps but at least kept the coolant in the radiator so the car could be driven, although with a constant eye on the temp gauge.

We finally recalled a conversation with a friend who had similar problems with a small block Chevy-powered ’37 Ford.  As he suggested, an oil cooler was added, which seemed to have the greatest effect of any of the “fixes”.  Where the car used to run at 230 degrees at highway speed, it now runs at 185. The highest we’ve seen was 220 degrees when shutdown after a long, hard run.  The nightmare had become a non-factor.

It seems that as the day’s drive continues, the large mass of the engine block and crankshaft picks up a lot of soaked in heat. Look at any block and you’ll see that the water passages for the coolant are concentrated at the top where combustion takes place.  That leaves the oil to do the job on the bottom end. It was pretty easy to pick up a cooler designed for engine oil at the local race car shop.  You’ll find them in your favorite hot rod warehouse catalogs as well.  Complete kits such as the one pictured from Flex-a-lite will have all the parts needed for the job.  Many sizes exist to fit your particular space. Don’t try to use a transmission oil cooler for the job as neither the fittings nor the cooler body itself are up to the pressures of engine oil.  You’ll want to get the cooler in a place where it gets direct airflow without sending waste heat into the radiator, which would be a self-defeating location. On cars with a bulkhead mounted radiator, you should have room to put it to one side. It can be put under the car but airflow will be reduced and debris damage could cause a leak.

You’ll also need an adaptor at the original oil filter location. Some simply screw on to provide ports for the hoses, but I really like the type made by Canton and some others that are held by a bolt, thus allowing the hose ports to be rotated to the most convenient angle. A few adaptors sandwich the hose section between the block and the oil filter which gives you the option of running two filters or adding only the cooler. I mounted mine with a simple adaptor (to help with an accessibility clearance problem at the engine), and a separate oil filter mount on the inner fender panel. That allows easier oil changes as the filter is now the highest point in the system and little dripping occurs.  It also puts the filter in the air coming through the radiator, carrying away a little extra heat. My system added almost a quart to the total oil capacity, which can only be helpful. You can buy complete filter relocation kits and add the cooler in the lines.  Just be sure to put the filter in line before the cooler to prevent clogging. These kits usually include black rubber hoses for connections. Be very sure whatever hose you use is rated for engine oil with its chemistry, heat, and pressure. I chose to use braided stainless steel covered hoses for their abrasion resistance, trick appearance, and the extra cooling the cover material supplies. The NASCAR shop that helped me claimed an extra 10 degrees of cooling over plain rubber hoses. Reusable fittings are readily available to make your job of installing the hoses much easier and much cleaner.

When you build your next hot rod, consider planning ahead for an oil cooler to avoid problems. It’s not terribly expensive and provides a serious note to your engine’s appearance.  I would consider it essential for any big block carbureted engine, and good insurance for any engine.   With winter downtime coming, maybe that’s a good project for a road warrior too! For over 14 years, Brent Vandervort, owner of Fatman Fabrications, has written a technical column for the Goodguy's Gazette, the monthly publication of the Goodguys Rod & Custom Association. Brent’s Good Tips column has helped literally thousands of hot rodders in the garage and out on the road. In fact, Vandervort recently published a book titled: “Building Hot Rods: 30 Years of Advice from Fatman Fabrication's Brent VanDervort.” When he’s not building chassis, Brent is either writing, flying an airplane or driving something old and cool!